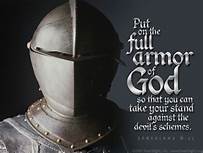 “Put on the whole armor of God, that you may be able to stand against the wiles of the devil. For we do not wrestle against flesh and blood, but against principalities, against powers, against the rulers of the darkness of this age, against spiritual hosts of wickedness in the heavenly places.” Ephesians 6:11-12 NKJV

Notice that we put on the armor of God.  God left getting dressed for battle to us.  He supplied the armor, we put it on.  We also fight the battle with Him right by our side.  No soldier would ever consider going into battle without their armor or without knowing the enemy and their strategy.  Why is it as believers we think we can run into battle with no preparation, fight “naked” and think we will win?